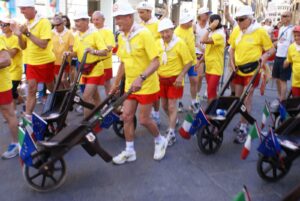 The Group of “Gli Scariolanti di Ravenna”, was born on the 100 km del Passatore in 1984

Since then, the wheelbarrows of Ravenna have opened the Marathons of New York, Rome, Montecarlo, Havana, Ravenna / Rome in 2000, the Jubilee year, as well as numerous stage Tours and many other events, maturing culturally enough to be considered Ravenna’s Ambassadors in the world. Ours is a path that deals with stories of water and reclamation.

This year the scariolanti are celebrating their 30th anniversary since the birth of the Group, and considering that time is unforgiving they celebrated the anniversary, facing

the relay race in folklore form. 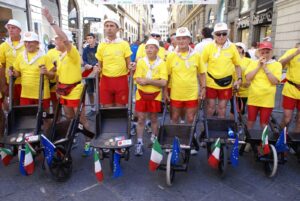 The Group started with wheelbarrows carried on their shoulders, (photo of 1984 at the 100 Km of the Passatore rally), opening the race and continuing to relay until Faenza to arrive together at 9.30 on Sunday.

A pastaparty also worked in Borgo S. Lorenzo, in 2002 350 portions of pasta were distributed to competitors who liked it.

This commitment is to keep alive the “MEMORY” of those who have sacrificed their own lives in order to survive in much more critical moments than ours.

Read about the topic: