Marco Menegardi winner of the 2021 edition, in the women’s field Denise Tappata stands out. Over 300 athletes at the start, 130 retired.

The one staged at the Enzo e Dino Ferrari Autodrome in Imola on 22 May 2021 can easily be defined as a great success. The Special Edition of the Italian 100 km road championship FIDAL gave a lot of emotions thanks also to a formidable organizational machine. Marco Menegardi from Mantua (Atletica Paratico), born in 1986, won the Italian 100 km title by recording the time of 7 hours, 22 minutes and 4 seconds. Third Italian 100 km Championship on the bulletin board for the formidable Menegardi, winner of the 47th edition of the 100 km del Passatore in 2019. Marco’s success never questioned starting from the 55th kilometer, thanks to overtaking the provisional leader of the race Silvano Beatrici ( Asd GS Phrasing), then second on the finish line less than a minute behind the winner. Massimo Giacopuzzi (US Dolomitica Asd) closes the absolute podium, more than 14 and a half minutes from the summit. 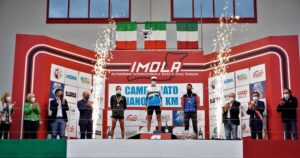 After the first 500 meters, the competitors diligently threw the mask in the special containers. The first lap, shorter than the other 20 scheduled since the start was located near the Tosa, saw Giorgio Calcaterra in the lead, followed by Marco Menegardi and, slightly more detached, a group of five runners who will occupy the positions on the margins of the top three. On the second complete lap Matteo Lucchese (Atletica Avis Castel San Pietro) went on the run, being then overtaken by Massimo Leonardi (X-Bionic Running Team) after 33 minutes of running, followed by a minute of detachment from Martino Angelo Marzari (Pol. Dilettantistica Santa Lucia) and Marco Visintini (Team Aldo Moro Paluzza). The provisional leader Leonardi began the lapped around 40 minutes into the race, a phase in which even timid drops of rain fell, albeit for a very short period. The favorites Marco Menegardi and “king” Giorgio Calcaterra kept compact in the middle of the group with very small gaps between them.

After a third of the race Leonardi increased his advantage over the favorites (6 seconds) while Lucchese joined the group made up of Calcaterra, Pessina, Marzari and Menegardi. Lucchese then took the lead at the 47th kilometer while Leonardi, long-time leader of the race, slipped out of the top 10 and retired shortly after. Towards the middle of the race Marzari overtook Pessina for the second position. At the 50th kilometer Beatrici took the lead, followed by Menegardi and Lucchese. The 2019 Champion del Passatore finally overtook Beatrici a few kilometers later, with Lucchese falling fourth behind Giacopuzzi. The latter then recovered by hoisting himself second behind Menegardi who took off thanks to an excellent race conduct, long praised by the commentators. On lap 52 Calcaterra was the victim of a crisis that forced him to stop, then resuming the delayed race in 27th place, failing to recover many positions. Beatrici and Giacopuzzi exchanged positions several times in the second part of the race, always kept at a safe distance from the leader Menegardi. Visintini at the 75th kilometer hoisted himself in fourth position recovering in the final. Five people rescued by the Red Cross during the race. 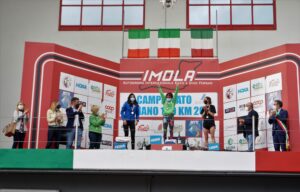 The special edition of the Italian 100 km FIDAL road championship was made possible thanks to the Emilia-Romagna Region, the Municipality of Faenza, the Municipality of Imola and Formula Imola; thanks to the sponsors BCC Credito Cooperativo Ravennate Forlivese and Imolese, Consorzio Vini di Romagna, HOKA ONE ONE, Acquainbrick, Natura Nuova, Coop Alleanza 3.0, Moreno, Caviro, Eurocompany, Kiron, S.F.E.R.A. srl, Betti Macchine and OraSì.
As every year, there are many voluntary associations and health services that have lent their service to the realization of the events organized by the Asd 100 km del Passatore.

Curious episode in the race finale when an athlete from Pol Dil Santa Lucia (Le Linci), after crossing the finish line, made a marriage proposal to his girlfriend. The couple’s friends gathered (respecting the Covid-19 distances) around the two while, the runner, knelt, putting forward the challenging proposal. After a cry of happiness, the girlfriend agreed to the proposal.